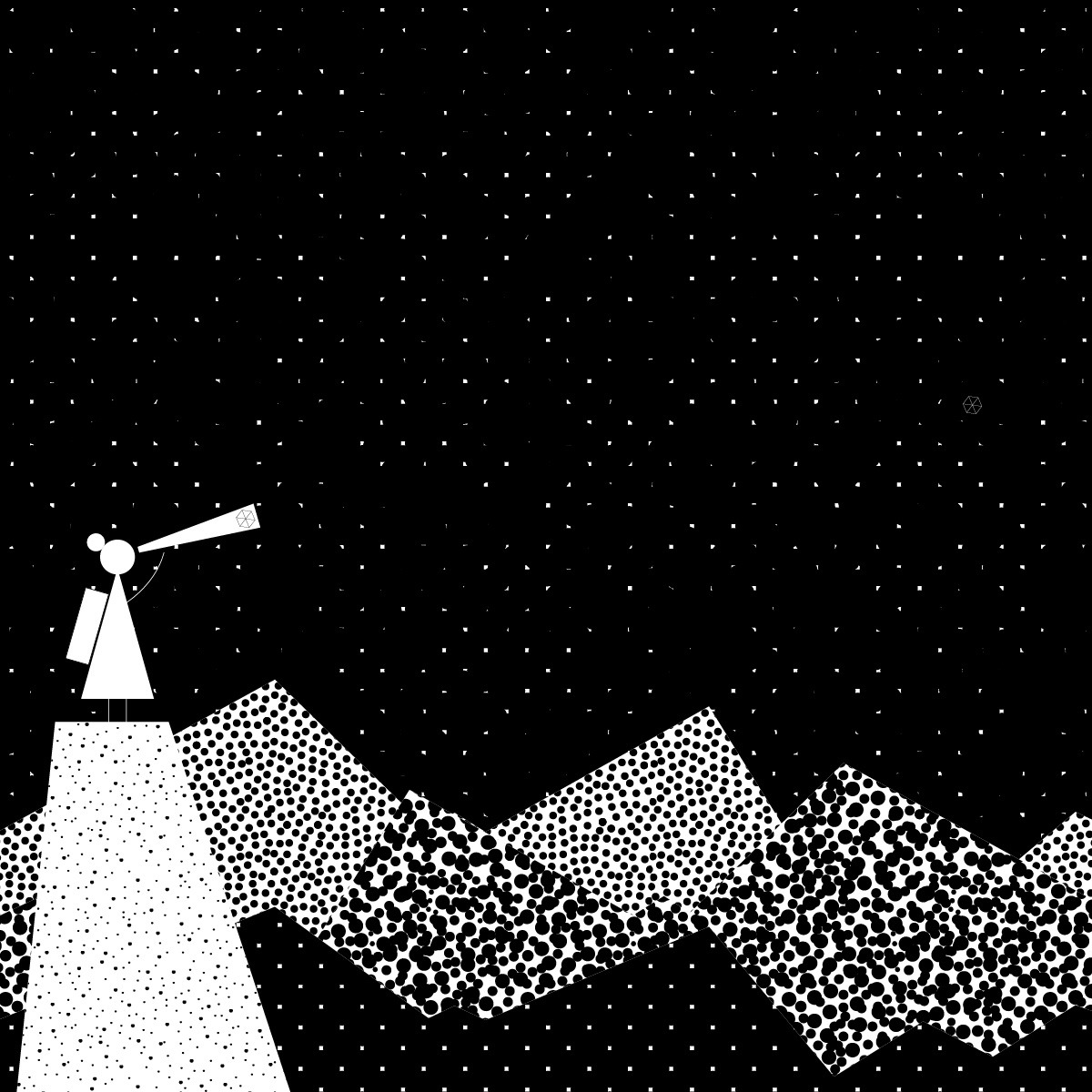 Still in development: these are sketches for a little autobiographical coloring book to be shared with my daughter and nieces. The textures, straight from Illustrator’s default swatches libraries, will probably become patterns or more elaborate halftones that make interesting values possible when using basic crayons or markers. 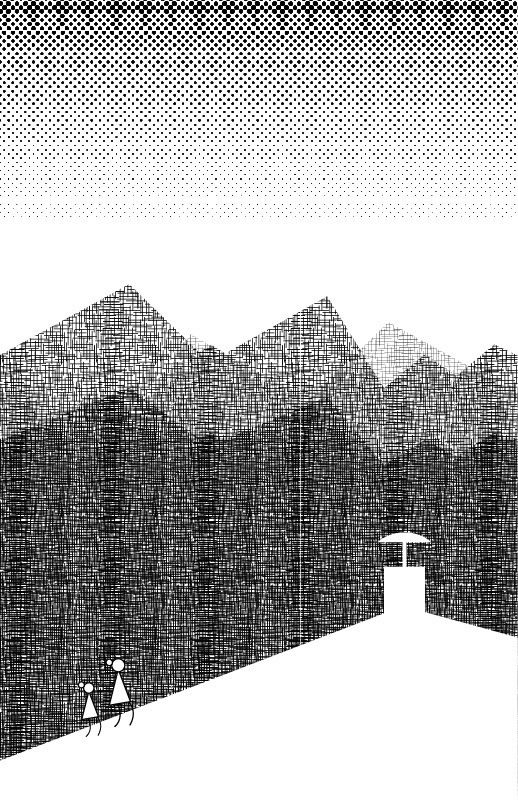 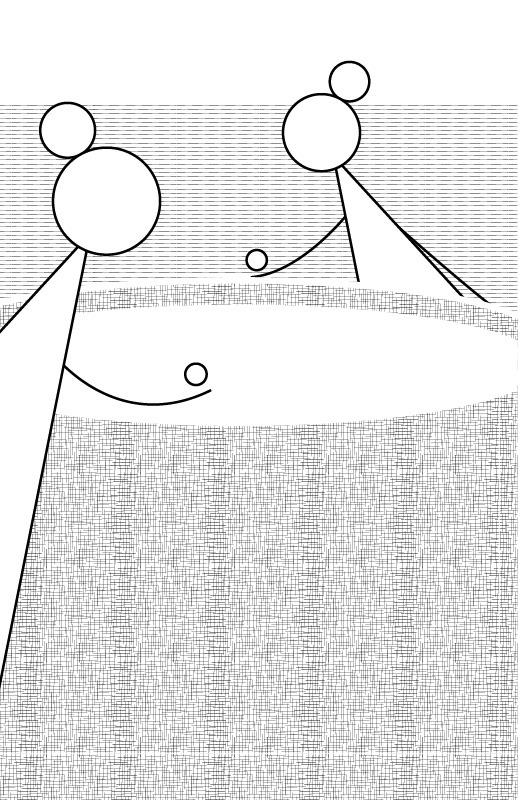 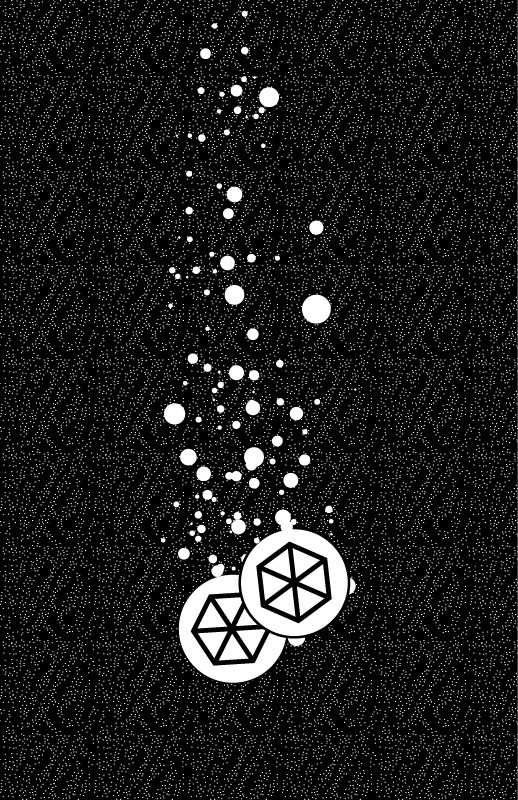 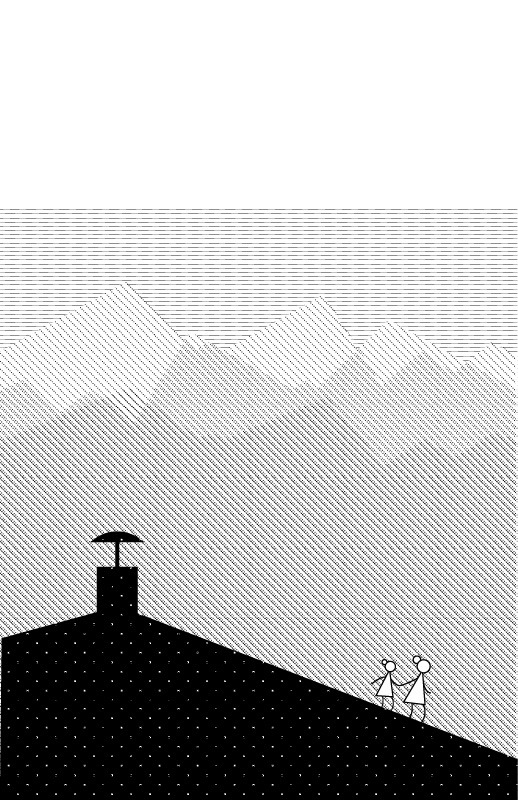 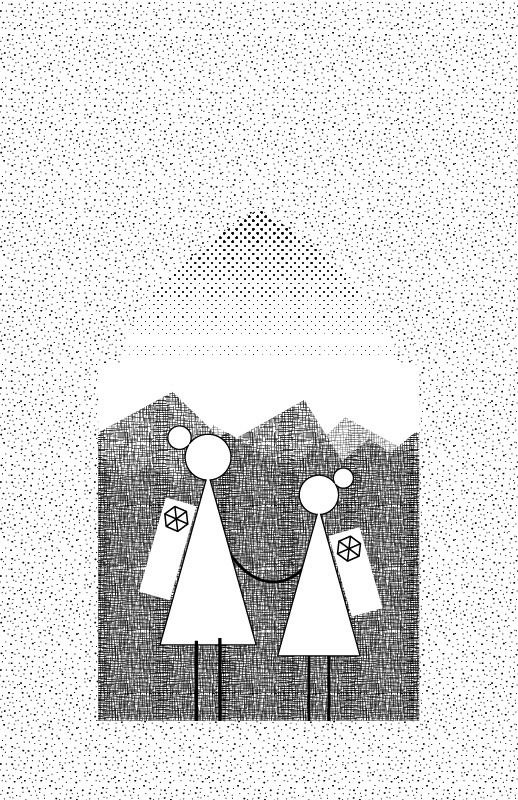 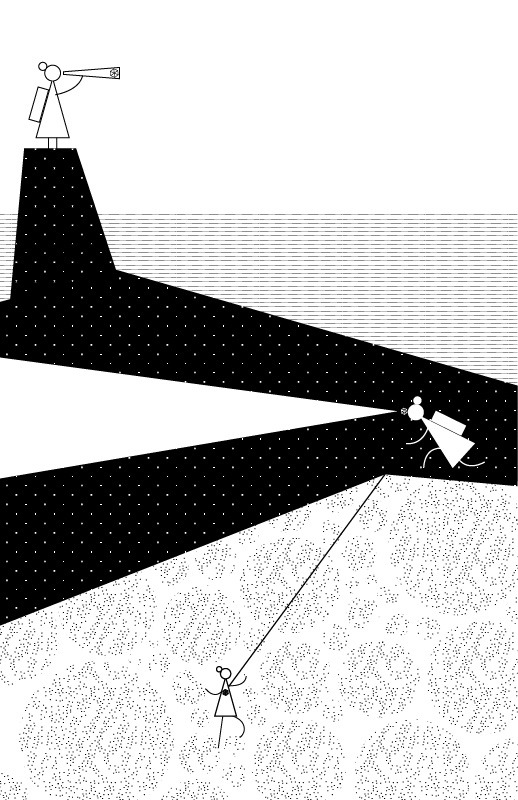 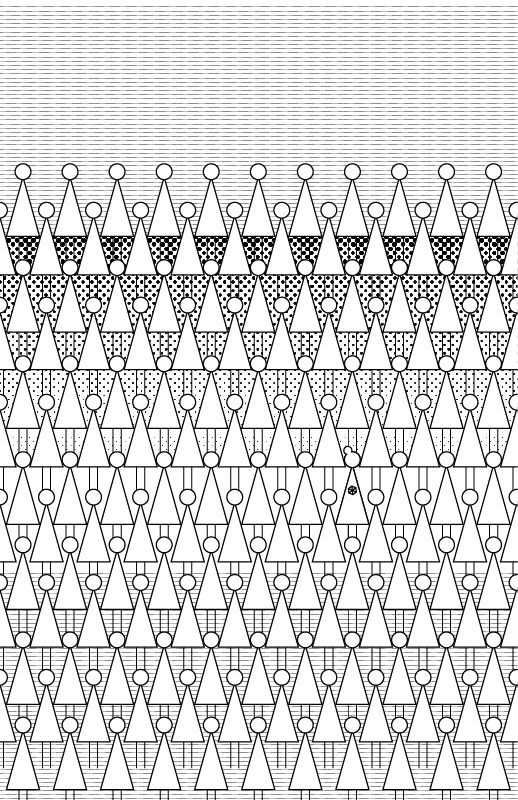 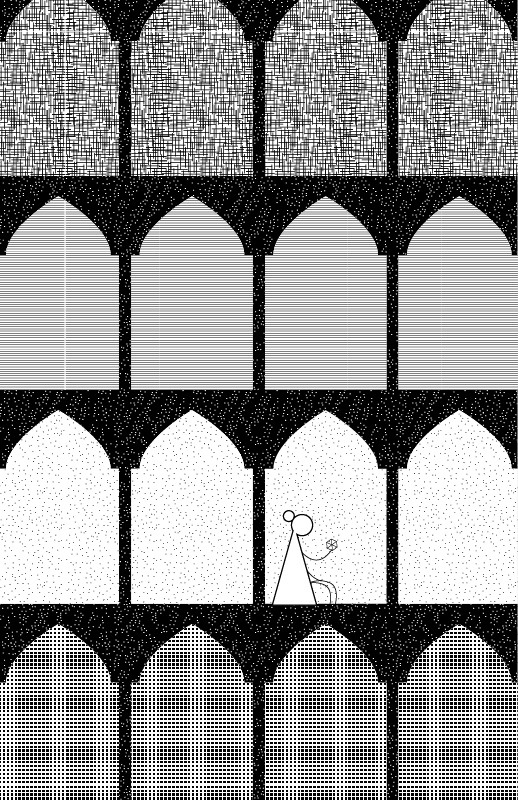 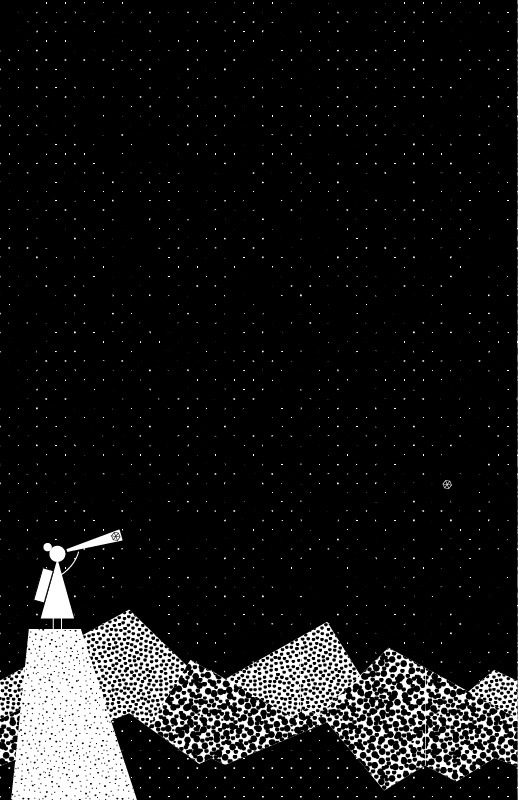 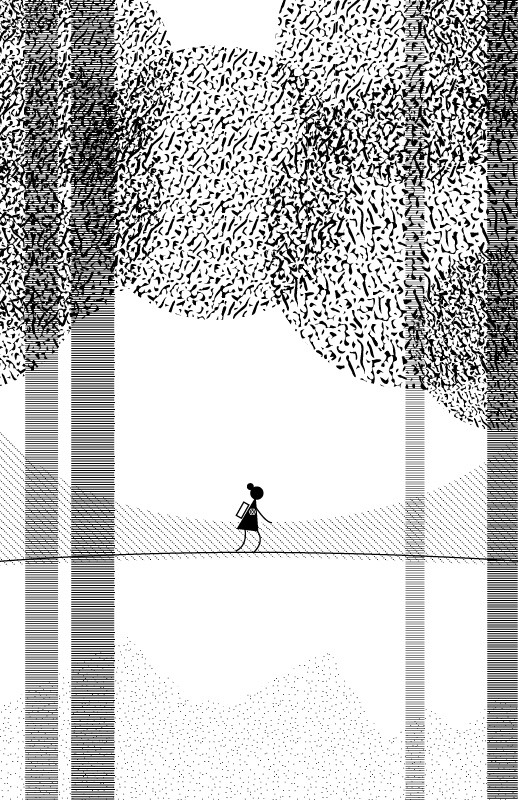 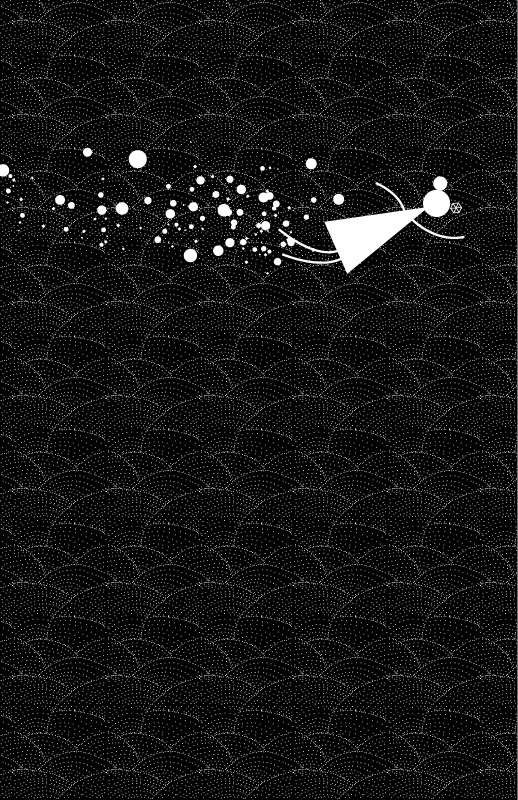 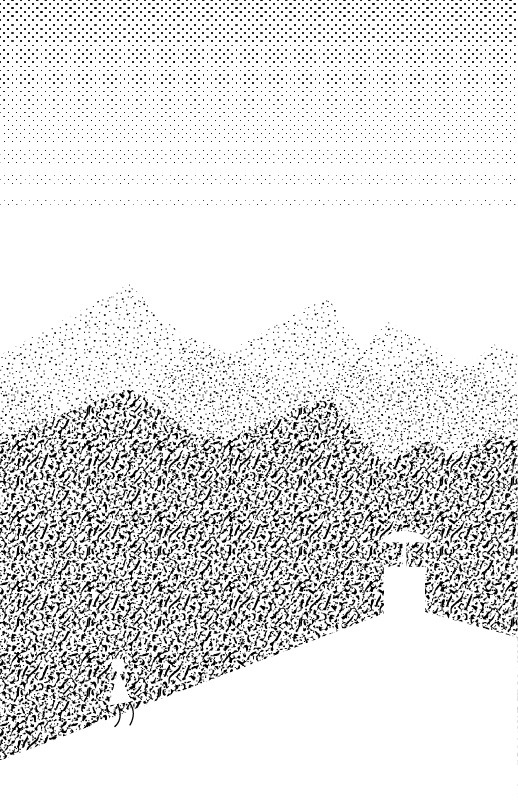 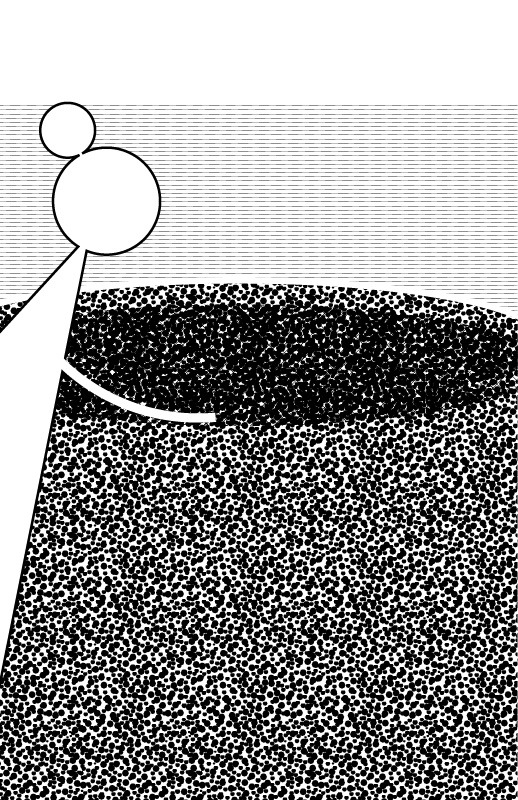 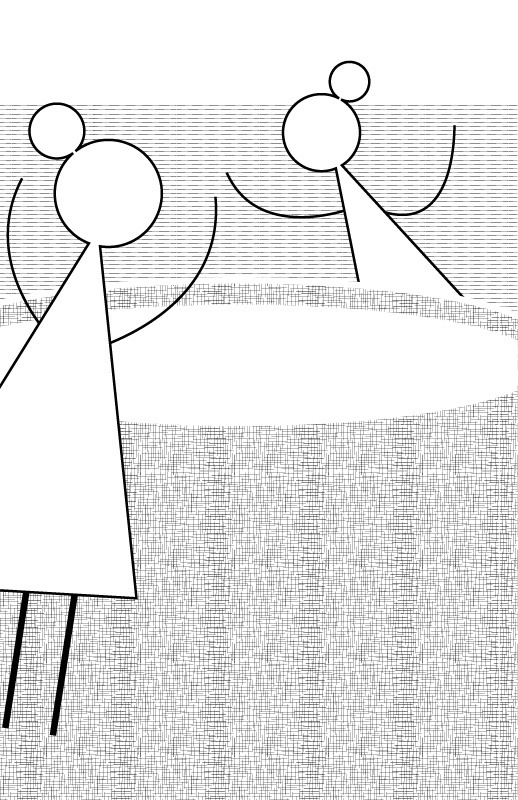 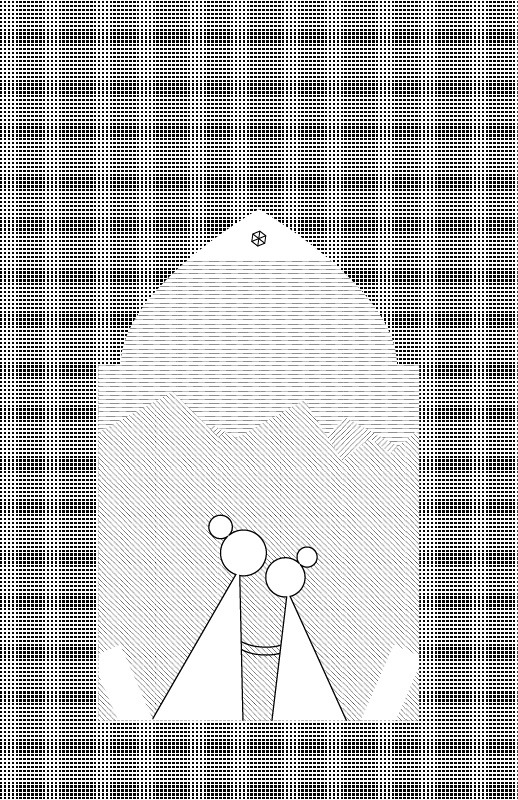 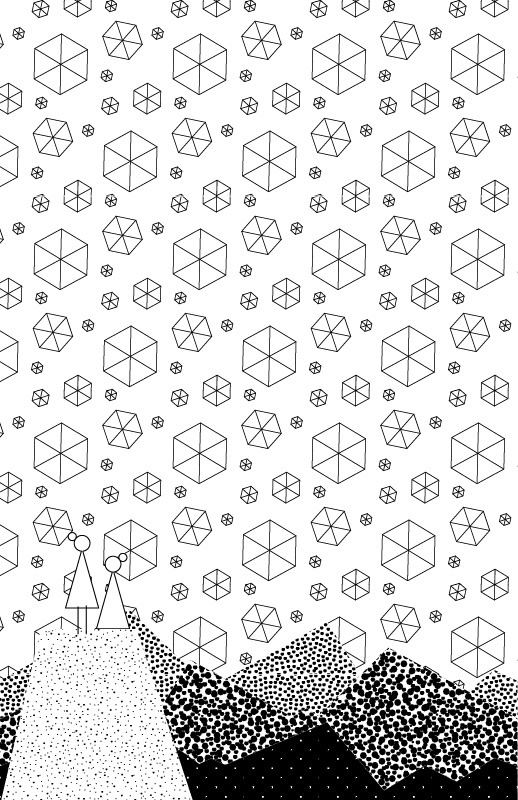 In a snowy town by the mountains, there once lived two sister wolverines. One day, their kind old dad wolverine gave them each a penny to throw in the wishing well near the highest peak.

When the dad asked the big sister what she wished for, she said, “I wish to be an artist.” The little sister said, “I wish for diamonds!”

As the sisters left the base of the mountain, they forgot all about the wishing well and instead had a grand time going to school, playing with their friends, and exploring the world. Their kind old dad gave each of them a special toolbag for their books, markers, secret notes and all-important snacks.

The big sister wolverine built forts, folded cranes, concocted stories, drew pictures and made tiny animals to make her sister laugh. The little sister wolverine made up the silliest jokes, cooked the tastiest mud pies, captained their canoe, and devised the best treasure maps for long summers of adventure and cozy winters full of stars.

When the sisters grew up and left home, they took with them their toolbags full of blueprints for forts, stories, drawings, jokes, and treasure maps.

Along their travels, they added new tools one by one. Languages, math, science, how to cook real food, fancy fort improvements, secret codes, mountain climbing ropes, and more were added every year, and every year, the new and old tools found uses out in the world.

Many challenges appeared: fiendishly difficult classes, tedious jobs, mean and grumpy people, terrible canoe captains, troubles around the beautiful world, ugly forts, and tempting but dangerous treasure were just some of what the sisters faced.

Even when they were far from each other, the sisters remembered to rummage through their bag for something useful when they needed help.

Back at home together for the first time in many years, the kind old dad asked the sisters if they remembered throwing pennies in the wishing well, and what they’d wished for.

The little sister looked into her toolbag and said, “I remember! I wished for diamonds, and here they are: memories of amazing people and places I’ve known. I’ll never lose them, and I have the jokes and stories to prove it.”

The big sister also looked into her toolbag and said, “Until now, I didn’t know it, but I’ve been an artist all along: with just my dusty toolbag, I’ve been able to draw and make anything I can imagine, and helped people smile along the way. I’ve always had one extra tool in here that doesn’t take up any space or ever weigh me down: it’s my imagination.”

The kind old dad wiped a tear from his eye with a claw, hugged his daughters, and the three of them set off for the base of the highest peak. Their wishes were the same: to wish sincerely, to be an artist, and to find diamonds every day.

Once again the sister wolverines went to the wishing well at the base of the highest mountain. The sisters each threw a penny in the cold water, but they kept their wishes to themselves. Shouldering their toolbags, they hugged and parted ways to continue on their travels.

Little did they know, the sisters had secretly wished for the same thing: to find a traveling companion that could keep up their brisk pace and explore the world together. Luck prevailed, and the sisters found their mates. The new companions had toolbags full of interesting new stories, even sillier jokes, fort blueprints, and the courage to face challenges.

The little sister was joined by four small wolverines, and their family found a cozy den near the mountain, where the wolverines could wrestle day and night, summer and winter. All the old tools were pulled out of the toolbag, dusted off, chewed on, reshaped, and made new again by small claws and tiny teeth.

The big sister, though she was happy with her artist toolkit and adventurous traveling companion, longed for a small wolverine of her own to share her life, just like she shared hers with her dear old dad. She traveled a treacherous, forking path in her search. Sometimes, even her handy toolbag didn’t have a light bright enough to see where to go next, but thinking of the wishing well, she continued to imagine that she would find what she was looking for.

At last, she came upon another kind traveler who granted her wish.

She joyfully returned to the mountain where the five small wolverines now played with sticks, rocks, cats, carrots, puppies, mangoes, chickens, and anything else they could find. Their forts overflowed with stuffed snakes, paper cranes, bowls, pictures, treasure maps, captain hats, and silly jokes.

One day soon, the sisters will return to the wishing well with their kind old dad and their traveling companions to hear the hopes and dreams of their many small wolverines with the drop of a penny.