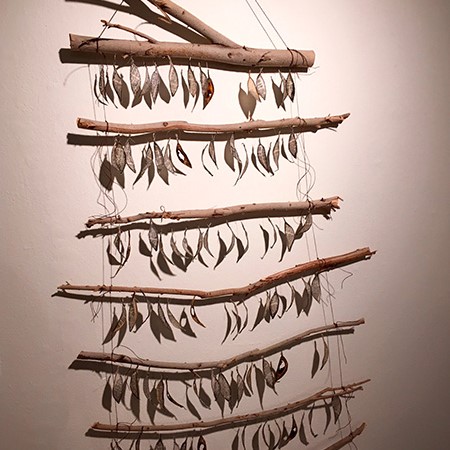 See a video of this show on Facebook here

“Bookish” is the 17th annual exhibit by ASU-based A Buncha Book Artists (ABBA), a group that often crosses disciplines into writing and technology, widening the definition of artists’ books. A few of the artists explore the re-appropriation of old books into sculptural forms, as in “Elpesodel Tiempo” by Antonieta Carpenter Cosand. It consists of decades-old diaries — with handwriting somewhat visible — joined together and splayed out into three standing semi-circles. Other artists use artifacts of publishing and printing to create found-object assemblages. Another technique is appropriating the pages themselves, as in Cheyenne Black’s “Leaves: A Cento,” in which leaf-shaped pieces of text hang from branches; the text contains excerpts from well-known female writers.

“Interrupted View” by Stephanie Burchett has topical resonance in referencing the U.S.-Mexico border fence and an American flag. The digital photographs are embossed onto a stand-up accordion shape, which is ready to be folded into a steel box. Also confronting contemporary issues is “I Heard You, Did You Hear You?” by Hailey Tang, in which a simple paper gatefold form deals with gender identity through words and images. Sam Fresquez deconstructs the idea of books by concentrating on alphabet letters, creating delicate boxes composed entirely of tiny, laser-cut wooden calligraphy. ABBA considers the components of books — typography, pages, images, binding, spines and covers — to be the surest means to expression.

Also in the news at Arizona State University: more about ASU’s Pyracantha Press:

There are thousands of printers, tablets and computers on the campuses of the nation’s most innovative university. But tucked away inside an underground classroom on Arizona State University’s Tempe campus sits a relic that has its roots in Gutenberg. It’s a breadth of heavy metal presses and moveable type, collectively weighing in at an estimated 30 tons. It occupies 2,000 square feet of space fanned out over two locations, and includes 3,000 cases of metal and wood type — enough to fill several semi-trucks. “This collection gives students and academics an incredible resource for teaching and creative research,” said Daniel Mayer, director of Pyracantha Press in ASU’s Herberger Institute for Design and the Arts. “The work we do here is super labor-intensive, and every project is unique and a work of art.” Most of the book projects are by invitation only, and each production can range from one to five years. Print runs can vary from 10 to 200 copies, depending on project complexity, handwork and duration. “A lot of the projects we choose are culturally significant and interdisciplinary,” Mayer said. “We are very selective in our choice, often picking subjects that might otherwise not see the light of day.” These pieces were created from paper made from clothing that refugees were wearing when they fled their homelands. Photo by Charlie Leight/ASU Now

Pyracantha has produced approximately 30 original books for national and international poets, artists, musicians, ceramists, historians and historical figures. They’ve also re-created works by William Shakespeare, James Dickey, Rita Dove and ASU’s own Alberto Rios, Arizona’s poet laureate. Kurt Weiser, ASU art professor and ceramist, is Pyracantha’s newest author. He’s excited about a special limited-edition book of his work, which Mayer said will be published later this year. “It’s different than ceramics. I don’t have to fire it. It doesn’t shrink. It doesn’t crack, and it doesn’t peel off,” Weiser said. “What you see is what you get. There’s certainly a craft to the printing process, and right now I’m just watching and listening.” The two have been collaborating on the project since February, which includes dialogue, proofing sessions, prototyping, cutting, folding and constant trouble shooting, according to Mayer. “It has to be precise,” Mayer said. “Everything is hand-produced and hand-built. That’s what makes our books special.”

Originally established as a letterpress shop in 1981 inside of the Art Building, Pyracantha Press publishes fine books and special limited editions for individuals, collectors and special collections, including the Getty Center, Yale University, Klingspor Museum in Germany, the Library of Congress and others. The press is self-supporting and receives sustaining gifts from the Hatchfund and the Philip C. Curtis Charitable Trust. In 2016, ASU was gifted the Adam Repan Petko Type Collection, making ASU’s type collection the largest at any institution of higher education in North America. Twenty years prior, he donated 10 tons of type to the book arts program and Pyracantha Press. Despite its massive size and weight, the press is capable of producing expressive works of art, said Professor Emeritus John Risseeuw, who came to ASU in 1980 to establish a book arts program within the printmaking area of the School of Art in what was then known as the Herberger College of the Arts.   “In the 1960s, 1970s and 1980s, this equipment was being offloaded by the industry as equipment was upgraded, so people like us, collectors, took it in so it wouldn’t be put in the trash and started making art with it,” Risseeuw said. Risseeuw added that this type of press is expanding commercially and gaining popularity with universities nationwide. He says the fascination remains because of the sentimentality factor and continues to be “a medium of expression.”

Some of the titles in the Pyracantha catalog have been spectacular. They include:

Pyracantha will remain in good hands, said Mayer, now in his 30th year at ASU. Part of his charge is to continue the tradition by training the next generation of printers — people like design major Hailey Tang, who has a passion for books. The 21-year-old Herberger Institute junior is not only being mentored by Mayer but is the president of A Buncha Book Artists, an ASU student-run organization of interdisciplinary artists and writers working in the contemporary artist book movement. Tang said their generation has transitioned into a digital lifestyle where many believe books have become obsolete. Tang said, however, that book and printmaking can never be fully replaced by the digital medium. “I find that as a designer and artist that books are a huge part of how I tell other peoples’ stories and communicating ideas,” Tang said. “I hope that I can keep the book arts alive in the future and make others realize how it is needed.”