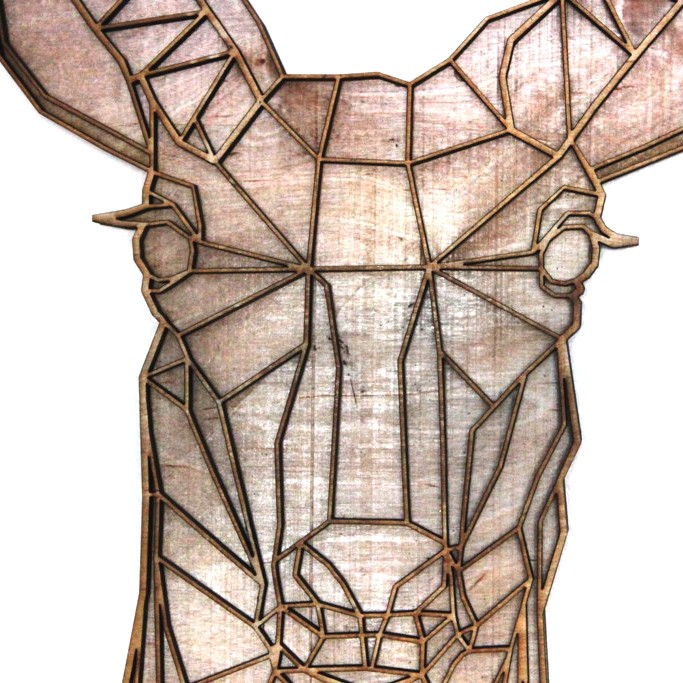 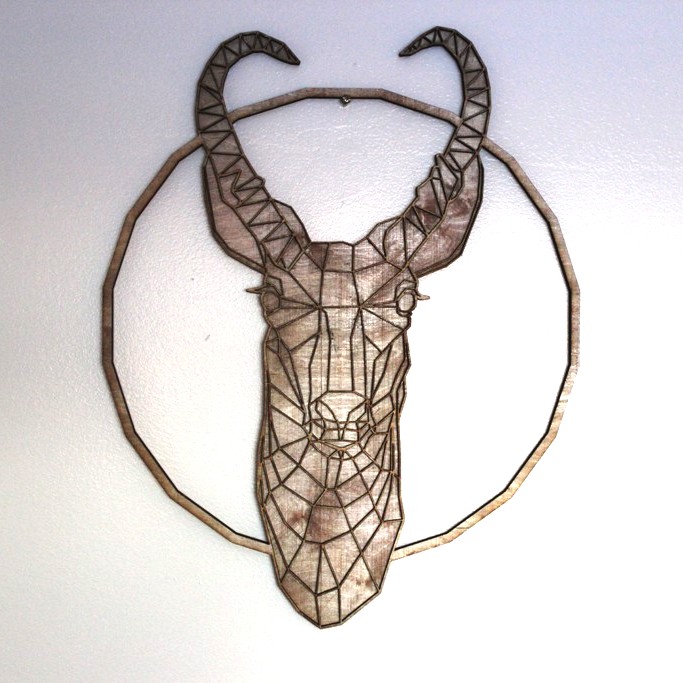 I completed this pronghorn antelope wallhanging for my brother-in-law over the holidays: laser cut plywood, finished with shellac.

Fun facts about pronghorn conservation in the Southwest:

At the turn of the 20th century, members of the wildlife conservation group, Boone and Crockett Club, had determined that extinction of the pronghorn was more of a probability than a possibility. In a letter from George Bird Grinnell, Boone and Crockett Club chairman of the game preservation committee to Walter L. Fisher, Secretary of the Interior, Grinnell stated, “The Club is much concerned about the fate of the pronghorn which appears to be everywhere rapidly diminishing”. By the 1920s, hunting pressure had reduced the pronghorn population to about 13,000. Boone and Crockett Club member Charles Sheldon, in a letter to fellow member Grinnell, wrote, “Personally, I think that the antelope are doomed, yet every attempt should be made to save them”. Although the Club had begun their efforts to save the pronghorn in 1910 by funding and restocking the Wichita Game Refuge in Kansas, the National Bison Range in Montana, and to Wind Cave National Park, in South Dakota, most of the efforts were doomed since experience demonstrated that after initial increases the pronghorns would die off because of the fenced enclosures. In 1927, Grinnell spearheaded efforts along with the help of T. Gilbert Pearson of Grinnell’s National Audubon Society to create the Charles Sheldon Antelope Refuge in northern Nevada. About 2900 acres of land were jointly purchased by the two organizations which was subsequently turned over to the Biological Survey as a pronghorn refuge. This donation was contingent upon the government adding 30,00 acres of surrounding public lands. On June 20, 1929, President Hoover included the required public lands upon request of the Department of Agriculture and the Department of the Interior after learning that the Boone and Crockett Club and the National Audubon Society were underwriting the private land buyout. On January 26, 1931, Hoover signed the executive order for the refuge, and on December 31, 1936, another executive order was signed, creating a 549,000-acre tract. This was the true beginning for pronghorn recovery in North America.

The protection of habitat and hunting restrictions have allowed pronghorn numbers to recover to an estimated population between 500,000 and 1,000,000 (excluding the Sonoran pronghorn, which is down to about 200). Some recent decline has occurred in a few localized populations, due to bluetongue disease, which is spread from sheep, but the overall trend has been positive since conservation measures were put in place.

Pronghorns are now quite numerous, and outnumbered people in Wyoming and parts of northern Colorado until just recently. They are legally hunted in western states for purposes of population control and food. No major range-wide threats exist, although localized declines are taking place, particularly to the Sonoran pronghorn, mainly as a result of, among others, livestock grazing, the construction of roads, fences, and other barriers that prevent access to historical habitat, illegal hunting, insufficient forage and water, and lack of recruitment.

Three subspecies are considered endangered in all (A. a. sonoriensis, A. a. peninsularis), or part of their ranges (A. a. mexicana). Populations of the Sonoran pronghorn in Arizona and Mexico are protected under the Endangered Species Act (since 1967), and a recovery plan for this subspecies has been prepared by U.S. Fish and Wildlife Service.